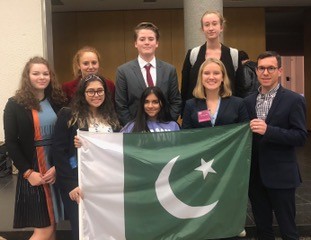 ESRM’s Model United Nations club attended the Berlin Model United Nations conference 14-18 November 2018. This BERMUN was the 27th consecutive year of the conference hosted by the John F Kennedy School. Seven delegates representing Pakistan and Algeria travelled to Berlin with MUN director Blair Namnoum. The opening ceremony took place in the Friedrich Ebert Stiftung and included speeches from the main country ambassadors, in our case Aviv Oppenheimer. Debating took place during the following days at the JFK school and the evenings were spent roaming around the city centre, visiting parts of the Berlin Wall, Checkpoint Charlie, the Brandenburger Tor and more.

Each student participated in different committees, where they had to represent the views of their countries whilst debating on important issues that focus on the conference theme “Strengthening Global Cooperation: Navigating Power Politics in a Shifting World Order”. This theme stresses the importance of cooperation between nations and having a common goal. Laura Strieder was in the Environment Committee discussing topics such as decreasing use of crude oil and limiting hydropower. Saina Valia participated in the Disarmament Committee, debating on how to eliminate chemical weapons and regulating artificial intelligence in weaponry. Lily Meckel discussed illiberal democracies and preventing foreign interference in elections in the Political Committee. Aviv Oppenheimer spoke about ethnic minorities, intercultural tolerance and civilians affected by conflict in the Human Rights Committee. Niko Busch was a delegate in the Economic and Social Committee debating on how to help developing countries escape poverty traps and also promoting positive sum economics in trade. Yasemin Aydin was in the Special Conference discussing terrorism, security and preventing migration caused by armed conflict. And, Mona Hilliges was in the Youth Assembly creating realistic grassroot initiatives through action plans.

Overall, the delegates enjoyed the experience and learned throughout the conference what it means to strengthen global cooperation. In the closing debate the emphasis on the importance of multilateralism challenged the students to consider how they are the generation to make an impact in the future. BERMUN 2018 was a first for ESRM’s MUN club and was a wonderful experience for all. 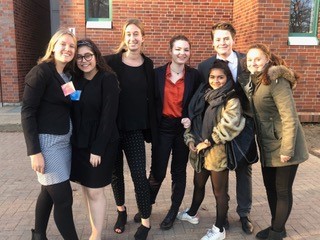