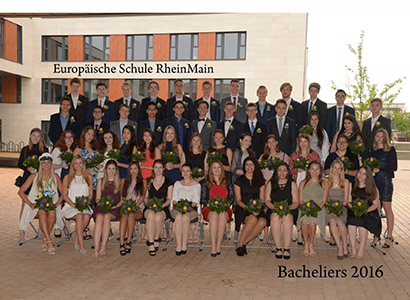 02.07.2016  Students of the European School RheinMain have successfully taken their European Baccalauréates 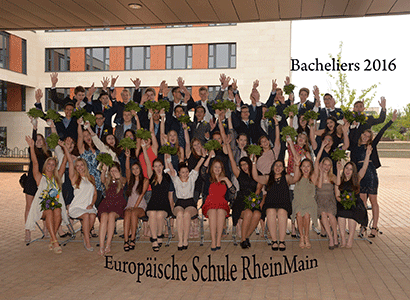 It is official now – the results of the very first European Baccalauréate of the European School in Bad Vilbel exceeds all expectations with a pass rate of 98.15% and a an average mark of 76.10.
In total 54 secondary students took their European Baccalaureate. For months they studied hard and closely collaborated with the teachers. After all, they are the pioneers, the very first year to take the Baccalaureate. There was no previous experience to draw on. As the school only opened in 2012, most of the students have been at the school for a maximum of 4 years only, which represents a great achievement – especially in the foreign language subjects.
“Students and teachers have excelled”, says Tom Zijlstra, Director of the ESRM. “We are very proud of this fantastic achievement”.
As the European Baccalauréate is a centrally organized system with the same rules and procedures applied across all European Schools, inspectors from France, England, Spain, Belgium and other European countries were overseeing the oral exams.
After all exams were taken the grades were sent to the central bureau in Brussels for checking and approval. Only then the graduation diploma was printed.
“We release young Europeans into the world, who appreciate and maintain the European values,“ says director Tom Zijlstra. Open thinking, progressive actions and a solution-oriented view are just a few of the many values that are taught at the ESRM.
A quotation from Tom Zijlstra’s speech at the Proclamation on Saturday says, “Our pupils will amaze the world and will not be forced to let their future in the hands of their grandparents.“
With intellectual and philosophical values many students go on to continue their education at European universities. The European Baccalauréate is of great advantage to help open those university doors.
To visualize the grades as German Abitur equivalents: 4 students have achieved a dream average of 1, 13 students have a „1“ in front of the comma and 27 students a “2”.
The formal Proclamation Ceremony took place on Saturday, 02.07.2016 in the Auditorium of the European School RheinMain with high-profile guests from business and politics. Following the ceremony teachers, students and parents were invited to a reception. The BAC-Ball in the evening gave everybody the opportunity to celebrate joyfully.
An overall very festive end, which acknowledges everybody’s great achievements and hard work over the past several weeks.