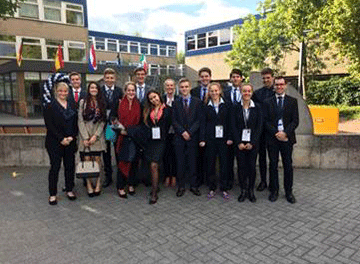 The ESRM MUN club participated in the Lorentz Model United Nations Arnhem (LmunA) from 7 October to 9 October 2016, a three-day conference during which over 300 high school students from the Netherlands and other countries engaged in a simulation of the United Nations. During the conference our students worked in committees as representatives of the countries of Israel or Switzerland, debating relevant topics, similar to those in the United Nations. Two of our students, Theo Burkhart and Sophia Busch, were even honored with "Best Delegate" awards and a few others were mentioned in the closing ceremony for their strong contributions. First timers Leon Wiesner, Tim Müller, Aviv Oppenheimer, Milena Obermann, Nora Cheraghi and Sophia Heine, quickly found their way, writing resolutions and giving speeches in their respective committees. Overall, an impressive weekend for everyone involved and we look forward to the next MUN conference.